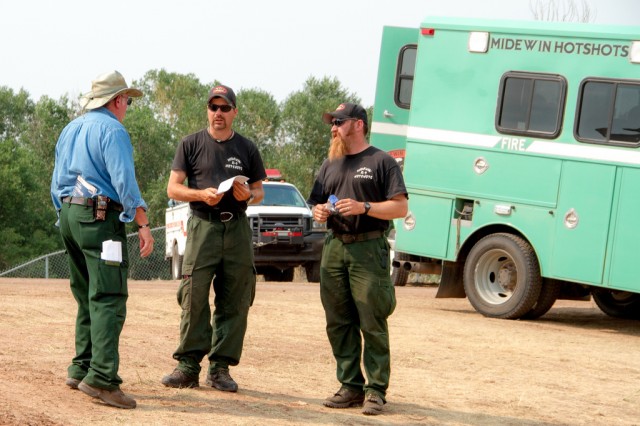 It is a hot and hazy afternoon. John leads Steve and me out onto the field behind Holmes Middle School once again, to the slowly-growing-familiar chaos of trucks, buggies, and tents–the temporary town of the wildland fire crews. John’s conversation as we walk is simultaneously informative and bewildering, as usual. He is hopeful that we’ll get to meet and interview a hotshot crew this afternoon. We find a crew–the Midewin hotshots, out of Wilmington, Illinois. Their supervisor isn’t around, but we introduce ourselves to Josh Strohmeyer, one of the squad leaders. He is the single most intimidating looking firefighter I have yet had the opportunity to meet. I immediately wonder if he ever simply dares the fire to cross his line. He wears reflective sunglasses, and a beard with an impressively long goatee adorns his face. He speaks quietly with something of a Northern accent. He hesitates when John asks him for an interview. We can’t do one without approval from higher up the chain of command, from the crew supervisor at least.

John agrees to wait for the supervisor, who is due back soon. In the meantime, he begins making small talk with Josh. Steve and I quickly realize that he is asking valuable questions, and we start recording. Soon, Josh is giving us a tour of the crew buggy–a dozen or so external compartments filled with any tools the crew might need to fight a given fire. My sense of being in the presence of a sort of “firefighting commando” grows, especially when Josh shows us the hand tools. John points out that, as a rule, hotshots customize their hand tools–a marked individuality that serves only to emphasize the more-than-usually-intense crew cohesion of the Midewin hotshots. A little while later, the supervisor returns. We meet Jerry Hoffman. Friendly, and willing to give us an interview. He looks tired, and we soon find out why. This is the last day of the current deployment for the Midewin hotshots. As soon as they finish talking to us, they will climb aboard their buggies and return home to Wilmington to grab a few days’ rest and family time before their next assignment. It’s already been a hot, dry summer in many places, and they expect this to be a long fire season.

It soon becomes clear that Jerry and Josh are looking at this event from a fundamentally different angle than we are. To them, the Waldo Canyon fire isn’t unique. They are the consummate professionals–subtly different from the other crews we have so far had the chance to interview. Other crews have been state resources, generally given special leave to fight fires outside of their normal operating area. But the Midewin hotshots are a federal resource. They are in high demand all season, every season, all over the country. They are thrown into the toughest situations, because they have proven time and again that they have what is necessary to do the job, and to do it safely. As such, they do not see any one fire as particularly unique. Josh explains, “It’s to the point where it’s–it’s a profession. It’s what we do. You work to provide for the family, you work to get satisfaction out of what you do.” We learn that hotshot crews generally mobilize for 14 days at a time, with occasional extensions to 21 days. Jerry explains to us how their current deployment has run. First they hit the Springer fire, near Lake George. Then there was the Weber fire, at which they spent most of their time. “That one was really kickin’ our butts [for a while]” Jerry says. He had scouted positions for what appeared to be 24 hours ahead of that fire, and in a matter of hours, strong winds drove the front far past what he had been able to plan for. Steve observes that it seems like a dangerous lifestyle. “We try to keep it as boring as possible,” Jerry responds. He is focused on the safety of his crew, and of anyone who might go where they do their work. During the Waldo Canyon Fire, the Midewin hotshots spent two shifts eliminating hazard trees near roads and camp areas, ensuring that the area will be safe not only for other firefighters but for campers and hikers and drivers once the area is opened to the public again. He concludes, “This is a historical fireâ€¦ â€¦we can go home with some sense of pride that we were able to help out.”