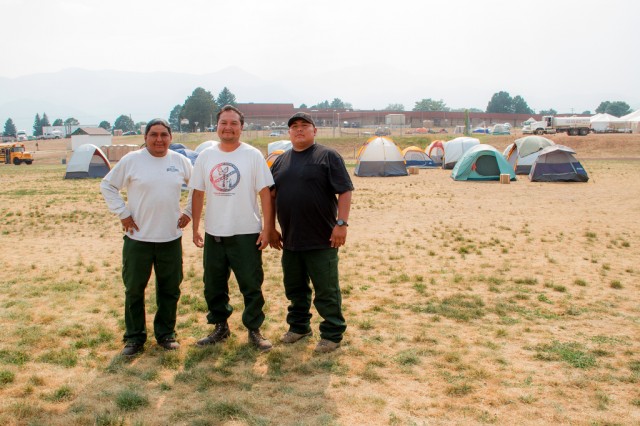 Meet Arles, one of the crew bosses for the Camp Crew at Incident Command, with two of his guys, Julsion and Darren. (In the picture, Arles is in the middle, with Darren on the left and Julsion on the right). We had the opportunity to talk with them on the first afternoon of our interviews.

They are part of a fire crew out of the Hopi Reservation in Arizona. They are soft-spoken, proud of their jobs and work, but not self-satisfied. They don’t speak rapidly; choosing their words with care and seeking the best ones to express themselves. Arles and Darren have both been firefighters for 10 years; Julsion fought fires for five years and has now returned exclusively as a camp crew member. From them, we learn the mind-boggling amount of logistical detail that goes into making sure those firefighters who are actually “on the line” are well rested, fed, and supplied to fight the fires.

Within hours of the Waldo Canyon Fire being spotted, a tier-one incident command team was being assembled to fight the fire. This team is made up of dozens of people whose job it is to request and allocate federal resources to fight fires when local resources are insufficient for the job. This Incident Command team puts resources where they’re needed as they come in, so any given fire crew (excepting hotshot crews) may be assigned to a section of line to punch in or hold, or it may be assigned camp crew duty.

My immediate impression when I hear that Arles and his guys are on camp crew is that they have somehow been given a second-rate duty. I rapidly find that I am wrong. Though they are not placing themselves directly in danger, they see their job as absolutely critical and refuse to compromise the quality of their work. Darren explains, “I think a lot of people don’t understand that without the camp crew, you can’t really fight fire.”

Arles tells us that he and his men must wake up before the firefighters and go to sleep after them. “Our days are 4:30 in the morning to 11 o’clock at night.” They run on caffeine and camaraderie, making sure that the men on the line have everything they need to succeed: showers, tents, sleeping areas, food, sack lunches for 16 hour shifts–all the myriads of tiny details that must be attended in order to enable a few thousand men to be in the field.

I ask Darren how he got into firefighting. His father and his older brother were both firefighters. “It’s a family thing,” he explains, “and I live in eastern Arizona, the White Mountains. And the forests and mountains are sacred to us, so I fight fires to protect them.” He is a man deeply attached to the land, and to the job–you might even say it’s a part of who he is, or that for him to not fight fires would be to deny a critical aspect of himself. There is sadness in their voices as they talk about what fires can do and have done to inhabited areas. They call it “urban interface”–a technical term for what happened in Mountain Shadows. They’ve seen it before, most recently just a few weeks ago in the Little Bear fire, near Ruidoso, New Mexico–that one consumed more than 200 structures. But they do not allow that to numb them to the destruction.

I am utterly moved by their response when Steve asks them about what they might say to those who lost homes in Mountain Shadows. I expected a professional response–something including the terms “urban interface” and “structures lost”–but I got a personal response.

Quietly, Arles says, “Oh man. There’s no words to express. We were here when the homes went up in flames. When you lose a home, it’s basicallyâ€¦” He trails off, and Darren jumps in: “Losing your life, man. Everything you have–all your memories, stuff you can’t replace, go up in smoke.”

Arles finds his voice again. “My thoughts go out to those people, and my prayers and my strength, you know? For them to rebuild what they’ve lost. It’s kind of hard to express for me; it’s unbelievable what a fire can do.”

Darren finishes with some hope: “No one could have predicted this, you know? But things keep moving forwardâ€¦ â€¦Today’s the beginning of the next step in life.”