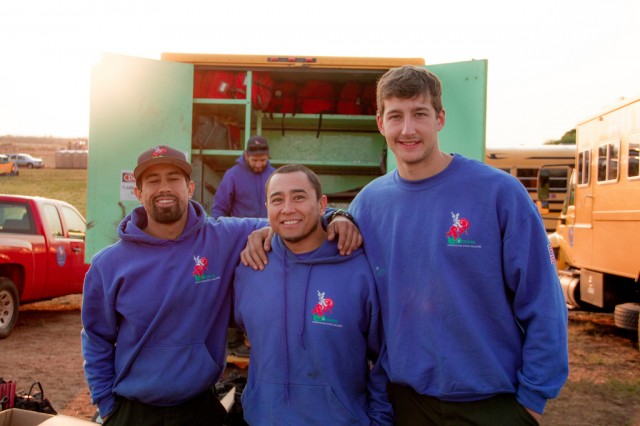 Meet three members of the Ahtanum fire crew (seen from left to right in the picture above):

Washington state resource, called in with special permission for the Waldo Canyon Fire.

Join me as I try to bring these remarkable men to you:

It is six in the morning. John, the Public Information Officer who has made himself our liason with the firefighting community, leads us across the field behind Holmes Middle School. His conversation is an unending stream of useful and terribly foreign information–Steve and I hardly have the knowledge necessary to understand much of what he says. But he is patient and talented at explaining, so we ask lots of questions during our stroll. The sun is peeking over the horizon, bathing us all in the hopeful light of a new dawn. John leads us toward a pair of “buggies”–heavy duty, multi-passenger trucks that wildland fire crews use to criss-cross the nation during the fire season. They come in many shapes and sizes, and are stuffed with firefighting tools, cases of water and sports drinks, packs of clothing for the men–everything they need for their 14 or 21 day rotations. The buggies we are approaching belong to a fire crew out of Yakima, Washington. They are busy preparing for another day “on the line”, fighting the Waldo Canyon Fire. We spoke with their crew boss a moment ago, and got permission to interview them provided they aren’t too busy.

As we draw near, the firemen look up and John greets them cheerfully. Tony, a senior firefighter on the crew, quickly agrees to an interview and grabs two more of his guys–Anthony and David. Briefly, we explain the goals of our project. They are enthusiastic, and thank us as if we are doing something worthy of note, though they are the men risking their lives.

Steve moves around, setting up his camera gear, and I begin our interview.

Tony and Anthony have each been fighting fires for two years. They even went to the same fire academy, though one year apart. David has been a fire fighter for four years, since he graduated from High School.
I ask them why they became firefighters. What motivates a man like Tony? He is 36, and several years ago he gave up a job as an advertising executive in LA to become a firefighter. He explains, “I’ve always had that itch, you know? Had to scratch itâ€¦ â€¦ It’s just something I had to do.” David has always loved the outdoors. Someone once explained to him the job of a wildland fire fighter, and he was hooked: “I get to work outside for 16 hours a day. That made it for me.” How to adequately capture and honor these men in words? These were the first men we had the opportunity to speak with, and as such they still stand out to me the most. They move and speak with the easy confidence of professionals, proud of what they do. Anthony straightens his back and looks you dead in the eye when he talks about firefighting. There is a glint there, something deep. The same glint is in Tony’s and David’s eyes. It brightens when Tony mentions how touched they all are by the community support in Colorado Springs–the men and women and children who have been lining streets to cheer and thank the firefighters. “It touches your heart, you know? That’s what we’re doing it for.”