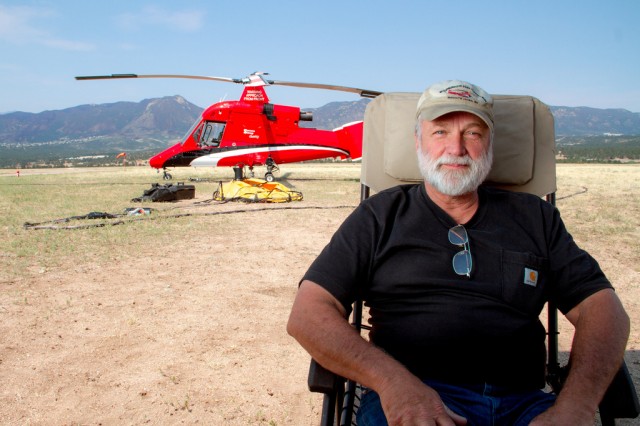 One of the coolest jobs in firefighting is that of a Helicopter Pilot. I got to interview one of over a dozen pilots who worked in the Waldo Canyon Fire. That’s slightly better than 10 out of 2000 (which is our ratio of ground firefighters interviewed). I considered it a rare honor. Mr. Jason Altseimer was very knowledgeable and understanding in answering my questions. I came into the interview woefully underprepared but completely excited. His is easily the most fascinating and desirable job from my (admittedly uninformed) perspective. I’m sure I’ll find other awesome roles that are played in firefighting, but I was thrilled to talk to him because flying helicopters is something I’ve always wanted to do, even if I only get to realize it in video games.

Mr. AltseimerÂ is from Oregon, and nowadays he’s retired and working part-time with Swanson Aviation filling in for pilots who need time off. He says that when he’s on contract he flies for fires all summer, jumping from fire to fire as his talents are most needed. “It works out for me, I like it. It’s not a regular schedule, but it’s just as fun.” He’s been flying fire contracts since the 1980s. Almost every summer since then he’s enjoyed his favorite part of the job–seeing the country and getting to travel–while also giving back through his unique fire-fighting talents. “It’s good to work with all the crews around the country and learn how they operate, while also learning the differences in fighting different fuel types.” The helicopter he flies is one of 25 currently in service around the world. It’s called a K-MAX synchropter, which is very specific and special type of helicopter in that it has two blades and a very slim design to allow the pilot visibility below him on either side. It uses an intermeshing rotor blade system designed and optimized for “external load” operations. With a payload lifting capacity of over 6000 pounds, it’s the perfect machine for flying huge buckets of water up to fires in the mountains. Mr. AltseimerÂ spoke with noticeable excitement about how much he loves flying the synchropter, and when asked about how it compares to a normal helicopter, he said that it took a long time before he was comfortable flying it, but “it’s such a forgiving machine, it just wants to fly.” The dual rotor system tends to hover naturally, which makes the craft relatively easy to learn. “The trick,” he says, “is to get it to do hovering turns or maneuvers! Somehow you have to get a difference in torque between the two driveshafts!” It’s obvious that here, thousands of hours of flight later, he is still excited every time he gets to fly. I admire the way he loves his work, and am blown away with the sheer quantity of technical knowledge at his command. The way you make such tricky maneuvers, by the way, is quite interesting: “To do that, you usually add pitch to one side, and tilt to the other, moving the controls on the floor.” There are flaps on the rotor blades that change the aerodynamics of the aircraft! After a brief interview, he took John (the Public Info Officer that has been escorting Tom and me to each of these interviews) and me for a walk around the aircraft: “This bucket here is a 700 gallon bucket,” referencing the gigantic yellow thing attached to his helicopter by a many-yard-long chord, “but with these altitudes we’ve been lifting about 500 gallons. It has a pump and so you just set it in the water and it fills itself up!” The bucket allows precise control for releasing the water so pilots can manage weight for takeoff from water sources and aim carefully when we drop, sometimes dropping in multiple locations from one fill-up.

As he continues to show us around the unique aircraft, he points out cool features like the small cockpit in which only one pilot can fit, but which has a great view. When we ask about the writing on the windows he says that a wax pencil is just the easiest way to record info he has to remember on the fly when he’s up in the air. (no pun intended!) After about a half hour talking to Mr. Altseimer we had to wrap things up, but I am extremely grateful to him for his time, and for sharing his knowledge and passion for his field with John and me. We joked afterwards about how no-one really likes interviews, and media journalists tend to ask questions that don’t make any sense before they take your answers out of context anyway. I had shown up with no list of questions at all, having only prepared for ground-firefighter interviews that day, but Mr. Altseimer was incredibly gracious and informative. I can only hope I’ve repaid him with an honest and flattering recall of our discussion. I know I’ll be curiously researching the helicopters he flies and the cool work he does for some time to come, and it was a blast getting to talk to him. Moreover, it was an honor to talk to someone who’s work has so benefitted our community.